What is Paristokierrätys? / Registered producers / News / Statistics / FAQ / Links and further reading / Values and vision / Board of directors / Contact us 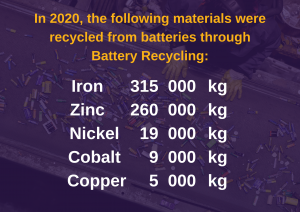 The amount collected surpassed the statutory minimum recovery rate of 45%. The recovery rate is calculated based on the batteries and accumulators put onto the market over the past three years. This means that the rate does not indicate that the rest, 55%, of batteries and accumulators ended up in mixed waste, but that most of them probably remain in use or have been exported for re-use in devices, for example.

Of the batteries and accumulators brought to the market in 2020, up to 30% were rechargeable with life spans varying between 3–10 years. A significant number of battery-powered devices are also exported for re-use each year, meaning that they are never recycled or included in statistics in Finland 1). Over the course of 2020, a very small number of large lithium accumulators (less than 5 tonnes) used in devices such as electric bicycles and mopeds was collected through the official recycling system. However, increasing numbers of them are expected to be disposed of in the coming years, which is why official regional collection points were added for them in the spring of 2020.

Recycling rates once again highest in Savonlinna and Forssa

Regional statistics indicate that recycling rates for batteries and accumulators were highest in the Savonlinna region and Forssa, as was the case in previous years. In both areas, the amount recycled per each resident was 530 g. People were also active in recycling batteries and small accumulators in the Kajaani, Ylivieska and Hämeenlinna regions.

The regional statistics regarding the recycling rates of the local population are only indicative as they include all batteries and accumulators collected from the postal code areas of the cities in question. Many of the localities mentioned above feature processing plants that dismantle electronics and electrical devices and deliver large volumes of batteries and accumulators removed from them to Battery Recycling.

Single-use batteries are the most collected and recycled

At Akkuser Oy’s plant, the alkaline batteries are crushed, after which magnetic iron (less than 25%) is separated from the crushed material. In Finland, the iron is refined into raw materials for construction equipment, cars, tools, etc. The remaining so-called black mass is currently delivered to a zinc smelting plant, where the zinc (approx. 25%) contained in the mass can be recycled to be used by the construction, automobile or pharmaceutical industries, among others. The amount of recycled zinc was about 260,000 kg, whereas the total amount of recycled iron was 315,000 kg.

In 2020, a small quantity of black mass was also delivered to Tracegrow Oy, a Finnish company developing fertilisers. In the future, it will be possible to produce fertiliser from all alkaline batteries recycled in Finland, because Tracegrow Oy’s process can utilise the manganese in the black mass, in addition to the zinc.

Only a small number of lithium batteries, which have become more prevalent in devices in recent years, end up in the official recycling system for the time being. This is partially explained by their long life span. Another explanation is that some of them are shipped abroad for recycling with electronics and electrical devices and, therefore, never end up in the Finnish recycling system. 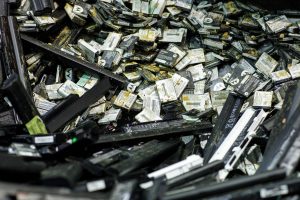 Lithium-ion batteries on their way to the crushing process and towards a new life in the electronics industry.

The cobalt-containing lithium-ion or lithium-polymer batteries used primarily in mobile phones and laptops were processed in Finland at Akkuser Oy’s processing plant by means of a two-phase crushing process. Among other materials, the fractions separated in the process contain 25–30% cobalt and 15–20% copper, which were delivered to Finnish facilities for further processing into raw materials usable by industry. From the batteries recycled in 2020, roughly 9,000 kg of cobalt and 5,000 kg of copper were collected for reuse.

Collected nickel-metal-hybrid batteries were crushed at Akkuser Oy’s plant, and the crushed materials were delivered to Finnish facilities for further processing into raw materials usable by industry. The most important metals recovered from nickel-metal hybrid batteries are nickel and cobalt, which the batteries contain about 35% in total. From the batteries recycled in 2020, roughly 19,000 kg of nickel was collected for reuse.

A separate process is currently being developed in Finland for low-cobalt and cobalt-free lithium batteries that are used in tool and electric vehicles, for example. Depending on their type, the batteries contain materials such as copper, nickel, manganese, aluminium and iron.

For lead-acid batteries, the recycling rates achieved were about 90% and, for other batteries and accumulators, at least the statutory 50%.

Read more about the utilisation of different types of batteries and accumulators here: https://www.paristokierratys.fi/en/how-to-recycle/recycling-process/.

The national producer responsibility statistics on the number of batteries and accumulators collected since 2010 can be found here, among other data: www.ymparisto.fi/fi-FI/Kartat_ja_tilastot/Jatetilastot/Tuottajavastuun_tilastot

The European Commission statistic on the sales and collection of portable batteries and accumulators can be found at:
ec.europa.eu/eurostat/web/products-datasets/-/env_waspb